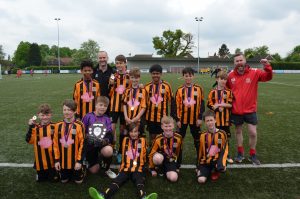 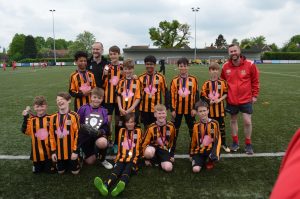 The CPR U11 Hawks, led by Mike Jeffreys and Russ Gill,  have lifted the NEHYL Division 5 cup this morning in Alton in a hard fought battle against Hook Utd Lions.

With a goal coming from a corner just five minutes into the game the remaining 85 minutes was a nail biting time for the spectators. The teams were well matched and Curley had several chances on goal with one hitting the post.  Hook battled on and had a few chances but the Hawk’s goalkeeper demonstrated that he is safe pair of hands, coming out several times as a sweeper keeper to meet Hook one-on-one. In the final fifteen minutes, Hook threw everything they’d got at trying to get that equaliser but Hawks defended valiantly and secured their 1-0 victory. A wonderful team effort, well done boys!!